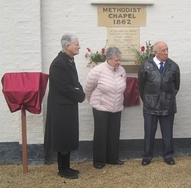 The unveling of a plaque in Toft displays the close cooperation between the Church in Toft and the village community; the obvious hand of God in blessing the village through the return of its fighting men; and the opportunity it offers all who pass to learn more about the Thankful Village concept.

So many villages like Toft saw their residents go off into war service during the First World War never to return. The term Thankful Village was popularised by the writer Arthur Mee in the 1930s; in Enchanted Land (1936), the introductory volume to The King’s England series of guides, he wrote that a Thankful Village was one which had lost no men in the Great War because all those who left to serve came home again. His initial list identified 32 villages. Today 54 such villages have been identified and Toft is the 54th and the only one in Cambridgeshire at the moment. 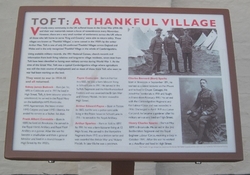 Though told many years ago that everyone had come home it took a lot of intensive research, led by the officials of Toft Historical Society, to confirm Toft’s status with those who officially give this designation (www.hellfirecorner.co.uk/thankful.htm).

So it was with great pride that on the 100th anniversary of the armistice, at the beginning of our Remembrance service, we were able to unveil a plaque which has been fixed to the wall of the Methodist church, below the memorial to the three men killed in the 2nd World War. Beside the plaque is an information board recording, as far as is known, the details of those who went to war and came home. These were unveiled by the children of two of these men, who still live locally.