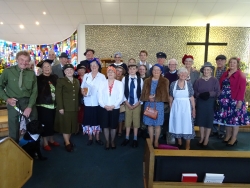 A full church celebrated Harvest Festival at St Andrew's Methodist Church Sheringham on Sunday 17 September 2017.  The service was led by Deacon Brenda Hayes on the theme of "Dig for Victory" and linked into the town`s 40`s Weekend. 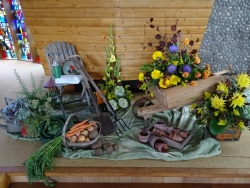 A full church celebrated  harvest thanksgiving in the midst of the popular 40s weekend in Sheringham which we aptly entitled ‘Dig for Victory’ Many members of the congregation as well as visitors from various parts of the country came along in 40s dress to reflect the war years, augmented by sound and video clips of devastation and trains carrying evacuees. Together with Rachel Eyre, a professional singer who specialises in songs from the 40s, throughout the service we were reminded that God calls us to live in community, celebrating the contributions made by unsung heroes during war time Britain from Bevin Boys and Land girls, conscientious objectors, church workers and  a gardener who recounted in the Norfok Dialect how he had heeded the call to ‘Dig for victory’ through digging up his prize chrysanthemums and growing vegetables instead! Paramount was the victory bought by Jesus and offered freely to his people both in times of war and peace.

Following the service we spilled out on to the lawn in front of the church where a marquee had been erected. Whilst Rachel sang war-time favourites, we gave away spam or bully beef sandwiches and homemade vegetable soup to passers-by who came to join in the lively atmosphere. Such was the success of this new initiative, we plan to build on it by making the whole weekend a significant part of our 50th anniversary plans next year. 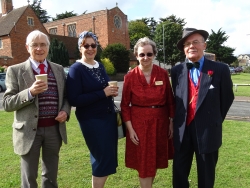 (Please contact Alison Travis/The District Office only for matters that relate to the Methodist District. For Local Church or Circuit matters please contact the people on the individual Circuit and Church pages.)